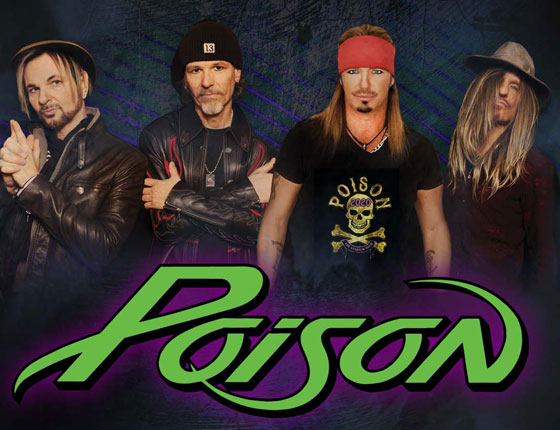 Only small wristlets or handheld wallets, not to exceed 8” x 5” x 2”.
No shopping bags, backpacks, etc.

Rock out with Poison live at Foxwoods Resort Casino!

In its all original line up POISON (Bret Michaels C.C. DeVille Bobby Dall and Rikki Rockett) has kept it rocking, real and relevant that will bring their own style, unbelievable live energy and hit songs to the big stage. Relentless from the ground up and forged in the hell fires of the Pennsylvania and Los Angeles club scenes they smashed their way up as an independent band who bet on themselves. Bringing a one part song, one part party and no holds barred full throttle totally energetic and live stage performances, Poison paid it’s dues in the small bars and night clubs of the upper east coast. The band appreciated other artists and although it was tough to original music heard in bars, Poison set their sights on having original material and soon realized they needed to head west to tackle the clubs of Los Angeles that welcomed original artists in hopes of getting a record deal. Selling everything they owned, putting all their money into a van with their equipment, some gas and food then driving from Pennsylvania to California where they ended up settling down in a broken down warehouse behind a dry cleaner in downtown Los Angeles. It was there that they truly forged their identity, mixing part street level glam and a passion for good songwriting with a die hard work ethic Poison would flyer the entire city of Hollywood in Los Angeles. Eventually the band would be voted best live band several years in a row by throwing mega concerts and parties, an attitude that continues right through today. By betting on themselves Poison ended up forming their own record label Cyanide Music along with an independent distributor in Enigma records Poison broke the gates wide-open with their first album release Look What The Cat Dragged In. Selling over 3 million copies of an independent album which included the big hits “Talk Dirty To Me”, “I Won’t Forget You”, “Cry Tough”, “I Want Action” and the underground smash “Look What The Cat Dragged In” they were soon picked up by Capitol Records and beat the sophomore jinx by releasing the #1 smash “Every Rose Has It’s Thorn”. Written singer/songwriter and front man Bret Michaels the song would remain atop the pop, rock and country charts for 3 months consecutively. The song became an major crossover hit, blasting its way instantaneously and creating a the sound for a new era. Also from the album “Open Up and Say…Ahh!” which sold 8 million copies out of the gate and spawned other hit singles, “Fallen Angel”, “Nothin’ But A Good Time” and “Your Mama Don’t Dance”. Followed up by the multi-platinum album “Flesh & Blood” Poison again lit up the charts with several more smash hit singles including “Unskinny Bop, “Something To Believe In” and more! As a lifelong Type 1 juvenile diabetes, Bret Michaels was recently awarded Humanitarian of the Year for his philanthropic work. Bret Michaels’ continues to celebrate our veterans, first responders on-stage nightly keeping all politics aside, just respect for these heroes. Over their career Michaels has brought in millions of fans from various demographics through Poison and his solo career with the BMB (Bret Michaels Band). From the TV screen celebrating a string of highest rated smash hit shows like “Rock Of Love” which brought millions of viewers and a new generation of fans including high school and college students along with winning “Celebrity Apprentice” in which he suffered a subarachnoid brain hemorrhage and had heart surgery to forming his Life Rocks Foundation Michaels maintains the same fire as when he first started. With a controversial yet highest selling cover of Billboard Magazine, Bret remains a bad boy with a heart of gold having carved out an incredible social media network with enhanced engagement across Facebook, Twitter, Instagram and YouTube which will serve as platform for an upcoming streaming show. Michaels vows to bring the hottest live show to the stage this summer.